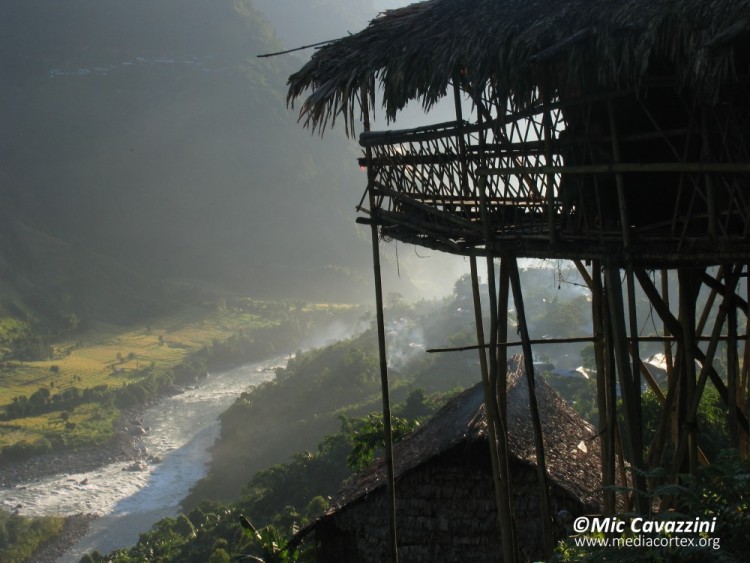 The DFAT website gives the cheery warning “We advise you to reconsider your need to travel to the north-eastern states of Assam, Nagaland, Tripura and Manipur because of the risk of armed robbery, kidnapping, extortion and terrorism related incidents. If you do decide to travel to these areas, you should exercise extreme caution.” This does cause me to take a deep breath and think about my ‘need’ to travel- is it simply voyeurism and vanity? I prefer not to answer that question and carry on with my plans instead. Getting to Arunachal Pradesh involves crossing the legendary emerald tea country of Assam, but the journey quickly loses its appeal as I realize I’ve been traveling for four hours in the wrong direction. This is followed by sixteen tortuous hours in the aisle of an overcrowded bus, trapped in between tea bags, a metal pole and an old lady who drapes herself over my legs. Along the road are bold notices of a safe driving campaign, incongruously written in English and always in an easy jingle. There is the comforting reminder that “Lane driving is safe driving”, the alarmingly catchy “After whisky, driving risky” or the more sobering “Better late on earth than early to heaven.” When I finally arrive in Tezpur, “Assam’s most attractive city”, does not immediately reveal its charms. In fact it doesn’t reveal its charms during the entire 48 hours I am stuck there, particularly after the loss of my cash card to a rogue ATM. I become convinced that the Buddhist blessings I’d received in Bhutan have expired now that I’m in a land of Hindus, Muslims, Christians and animists. I have a lonely dinner in an empty bar lit only by a television in the corner wondering what I have gotten myself into. 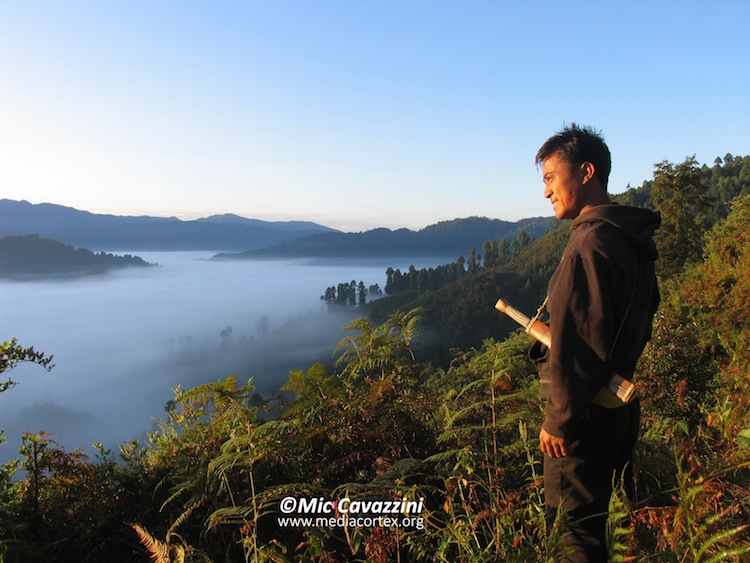 The terrible road to Ziro crawls through steep terrain immersed in dense jungle; palms, banana trees, climbers and foliage of all sorts that leave no room for any colour beyond green. The musty sweet scent of the greenery is strong in the thick humid air and some strange thought of ‘God’s own country’, enters my head, as the New World had been described by the naïve Europeans that first ventured there. Ziro is a frontier town straight out of such literature. A single main street that was paved long in the past is now home to all sorts of street vendors and noisy livestock. Clustering around this is a seeming shantytown of bamboo and corrugated iron that breaks into discrete little villages. My guide Michi Tajo, explains that though this all encompasses the Apatani tribe, he is named after the Michi village and his own clan group within that. Sometimes, however, he uses the name ChristopHer, given to him at his baptism into a local revivalist church. The presence of missionaries is evident in these parts in schools as well as churches, and infuriatingly in the form of posters describing American-styled ‘healing-crusades.’ The churches have also been trying to quell traditions such as animal sacrifice to the traditional tribal Donyi Polo (Sun and Moon) cosmology, although markers of this faith were still seen everywhere. Most noticeable are straw and bamboo frames erected outside houses on the death of a family member, decorated with egg shells and piles of mitoun skulls. Mitoun are massive bulging ox-like creatures with pink skin and horrific horns that wouldn’t seem out of place on a Star Wars set. 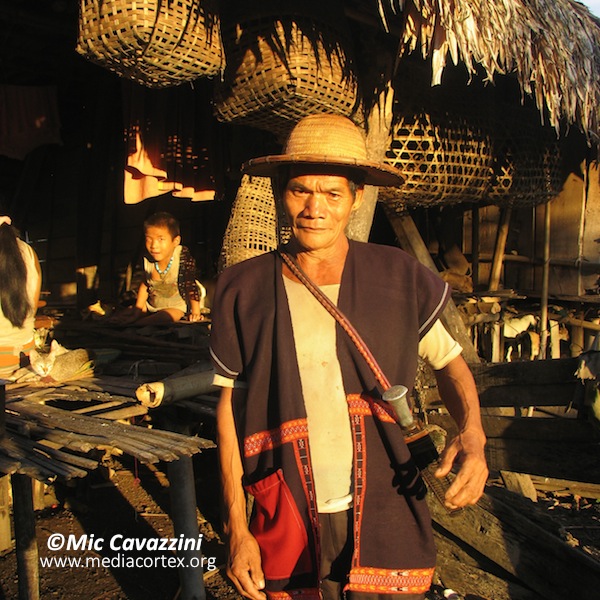 We visit many houses in the village and everyone is introduced as an uncle, or a brother or a cousin of sorts. I am never sure exactly how precise he is being but it is clear that this loose assembly of clan members is all-important, and work is shared liberally within these boundaries. Each small building would be home to three generations, including a sister’s child or a wife’s mother. And nestled amongst each cluster of houses is an open platform where disputes are resolved in the open, and adjudication granted by the wisest clan elder. In each house people come and go without grandiose greetings or formalities- there is little sense of propriety and I am offered cloudy, acrid rice wine at ever stop, that is liberally topped up before I even get halfway through it. The homes are almost entirely made of bamboo and other plants; lashed beams of mature bamboo for the floors, flattened strips of suppler young branches for the walls, and some sort of thatching of banana leaves on the roof. The family cooks and sleeps on the floor around a wood fire set in clay in the middle a large living room. I look around at these tea-coloured Indo-Chinese faces lit by the flickering fire. Their features are smoother than those of more recent Tibetan immigrants, and the language is a beautiful song of lilting breathy vowels. Tajo’s grandmother, with large black plugs stretching her nostrils as an aesthetic deterrant to hunters from other tribes, chuckles as she gleefully barbeques frogs for me, freshly caught in the surrounding wet rice fields that afternoon. 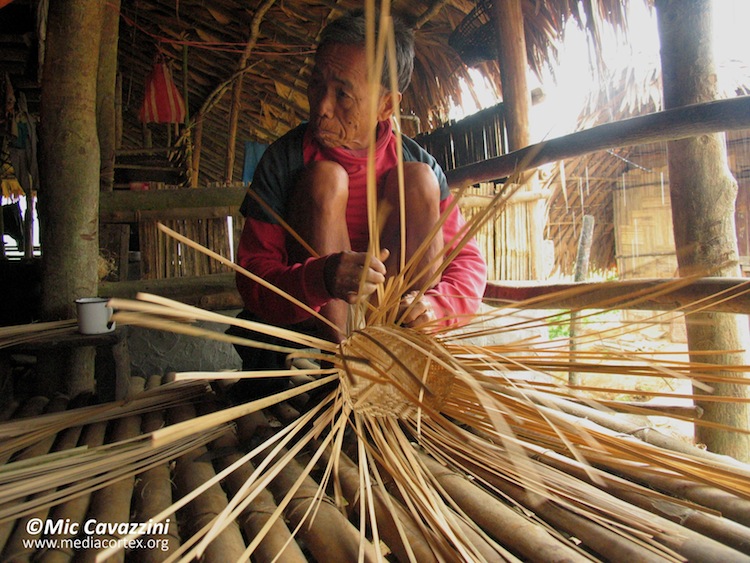 Another 5 bumpy hours up a narrow mountain road are Tajo’s in-laws in the village of Nacho. The Tagin tribal people here are suspicious even of my Apatani guide and they communicate in Hindi given the difference in their first languages. The houses here teeter at the downhill end on miraculous bamboo stilts of up to 5 metres in height. The verandah looks out over an awesome river valley consumed entirely by jungle but for the occasional yellow scar. These are areas of sloping just gently enough for the cultivation of corn or millet. I wonder for a moment why they don’t bother with terraces here, but the answer becomes obvious. In this landscape nothing will last the relentless force of the summer rains. Looking carefully towards these ‘jum’ cultivations you can notice a tiny hut here or there nestled among the palms. These are the hamlets in their original state- a day or more from the road by rugged jungle paths and isolated from the supply villages for months at a time. Amongst these almost effeminate Asiatic faces the darker skin and furrowed features of Biharis or even Nepalis are always startling. These economic migrants from the overcrowded west typically work lowly jobs as cooks in government bungalows or in roadside restaurants. The most pitiful of them work on the roads themselves, lined with their rusted tin living quarters. Young women sit on top of piles of rubble, chipping and hammering the gravel gravel while scrawny men carry agonising bucketloads back and forth. Their tiny children bawl in the dust and heat, barely protected by straggly umbrellas. I’m told these families must make their entire life on the road, earning barely enough to eat and constantly traveling where the work is required. It must be heartbreaking for them to see how every summer much of their punishing work is swept away by mud and rockslides. 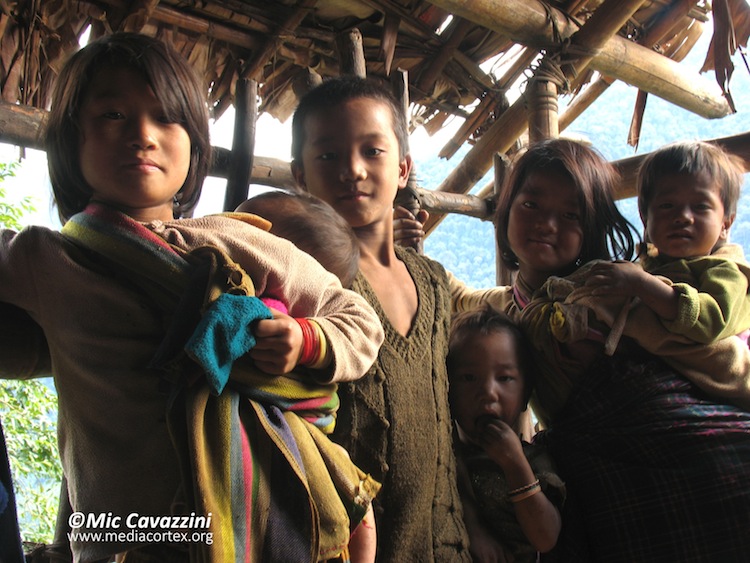 To return to Assam we descend towards the endless brown smudge of the horizon until we reach the banks of the fabled Brahmaputra river. In summer it may be 15 kilometres and a half in width but now it is a labyrinth of sandbanks that take us two and a half hours to navigate in a puttering ferry laden with people, motorbikes and pigs. Each time we seem to approach the opposite shore the boat steers lazily around it to reveal yet another stretch of brown water. One feels trapped within this oozing and shifting landscape which appears to muffle all the life around it- the occasional flight of birds, a fishing canoe frozen still in the distant, a brief and mysterious churning of the water beside the boat. This massive river is a force of its own and associated with many Hindu narratives. From the tranquil rural setting on the northern bank we are finally transported to and industrious cluster of houses on the outskirts of the city of Dibrugargh. Here people wash or fish from the banks, make pottery from the river clay, transport logs on massive bamboo rafts or simply play cricket on the sand flats. The young boys crowd around me begging for me to take their photo and I am made to sign their cricket bats as if I were Ricky Ponting. No doubt this strange apparition will be told in sixty households tonight. 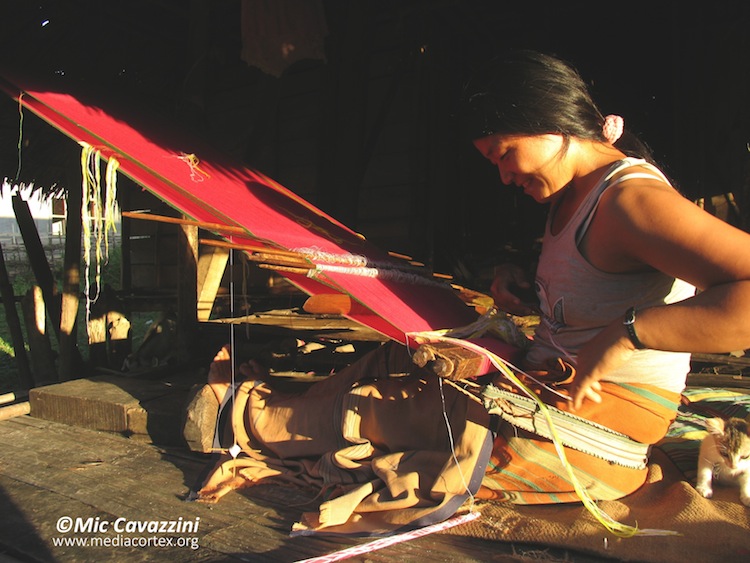 Along the riverbank I also find glazed and colourful statues of the goddess Kali, sharp red tongue protruding over sharp teeth and curved sword brandished overhead. These are brought to the river by crowds of delirious men, their faces splashed with red as they dance to a ragged drum beat. The statue is immersed in the river for the Kali puja, and 5 days later another ceremony to Shiva involves burning of unnerving straw effigies. The Vaishnavite Hinduism practiced in Assam is focused on direct interpelation with their principal god, Krishna. The ‘satras’ are large spare prayer halls where worshippers meet at sundown to enact theatrical scenes from their mythology or to sing and dance in homage. In the town of Sibsagar a large historical satra draws a number of colorful, bearded and languid saddhus, who wave me over in offers of blessings. The temple’s terracotta dome capped by a golden ball glows in the setting sun, and there is a moody tranquility by the lily-covered reservoir attached. The dusk at these latitudes has a strange suddenness- a brief flare of golden light before the night draws in quick and close like a velvet glove. Some stylish young men offer me a beedi to smoke and incredibly we find some sweet milk coffees and pastries from lamplit stalls nearby. I am reflecting on this charming evening bustle when calm is broken by an urgent male voice from the loudhailers posted at every intersection. People stop what they are doing and cock their heads, and I ask if this has some religious significance. Michi Tajo replies that that three bombs have just been detonated in a marketplace in Guwahati only a few hours away. My heart skips a beat. My blissful introspection evaporates. We find out later that some hundred people have been killed. Responsibility is claimed by an Indian jihadist group retaliating against the government’s moves to evict thousands of illegal Bangladeshi immigrants from the region. Assam may well be a vibrant cultural melting pot, but one that is ready to boil over at any moment. 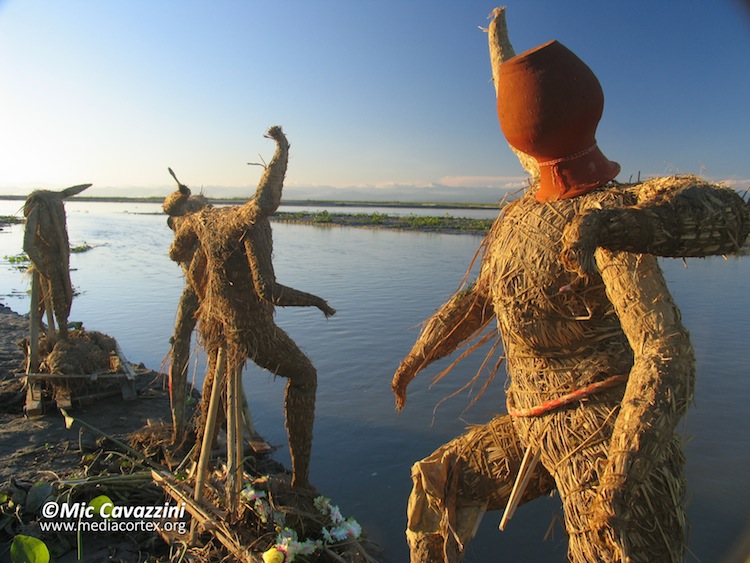