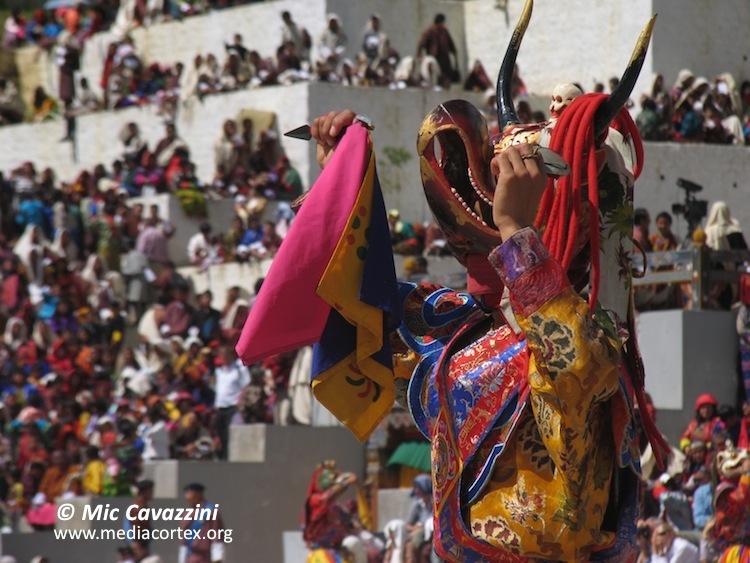 Land of the Thunder Dragon is what the Bhutanese name Druk Yul translates to. It is a country I know little about, except that it was for centuries an isolated mountain kingdom, closed to the west. These days entry is restricted by high government taxes, and some perverse side of me wants to have the privilege of seeing what the regular punters don’t get to.

The flight from Kathmandu takes you right along the spine of the Himalaya. Like familiar looking statues, the white shapes of Makalu, Kanchenjunga, Lhotse and then Everest rise up from the carpet of cloud- not much lower than our cruising altitude. From this perspective the climatic significance of the mountains is striking. From the rolling green landscape on the Nepali side, to the barren grey ‘rain shadow’ of the Tibetan plateau… it’s clear that no moisture gets past this massive barrier. 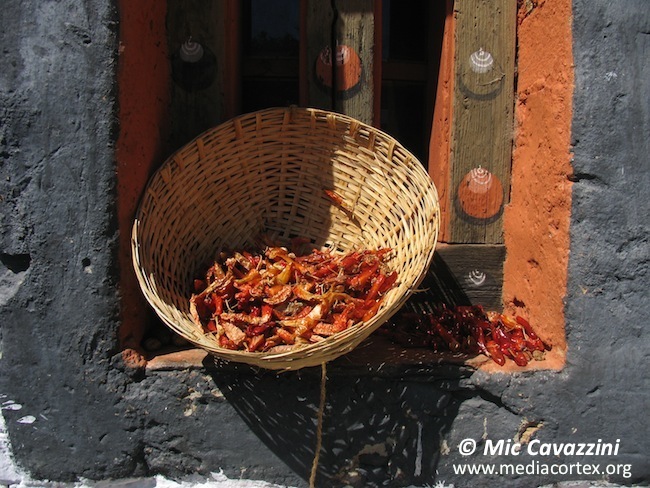 Bhutan has a population of only 700 000, ‘rounding up’, ethnically most linked to Tibetan migrants from the 17th century. They evolved their own brand of Buddhism and remained unconquered by Tibet, India or even the British Empire over their history, largely thanks to the rugged landscape, and their stunning, fortified monastery-citadels. Where in Nepal I’d seen farmers carve out arable land in every possible niche, here the hills are largely wild- widespread old pine forests and at higher elevations gnarled prehistoric-looking firs and ferns. The farmhouses are sparsely dotted, and often given to livestock rather than farming, giving Bhutan the moniker of ‘the Switzerland of the Himalaya’.

These houses are always gorgeous, 3 story structures with ‘baroque’ wooden awnings and spiritually protective paintings on the walls. These might be animals, the Tibetan knot, or very often a large 5 ft high phallus on either side of the door. These were done in incredible detail; hairy scrotum, sprays of ejaculate, and sometimes even a helping hand. I’m not sure exactly how these keep evil at bay, but they probably diminish the value of adolescent graffiti at least. 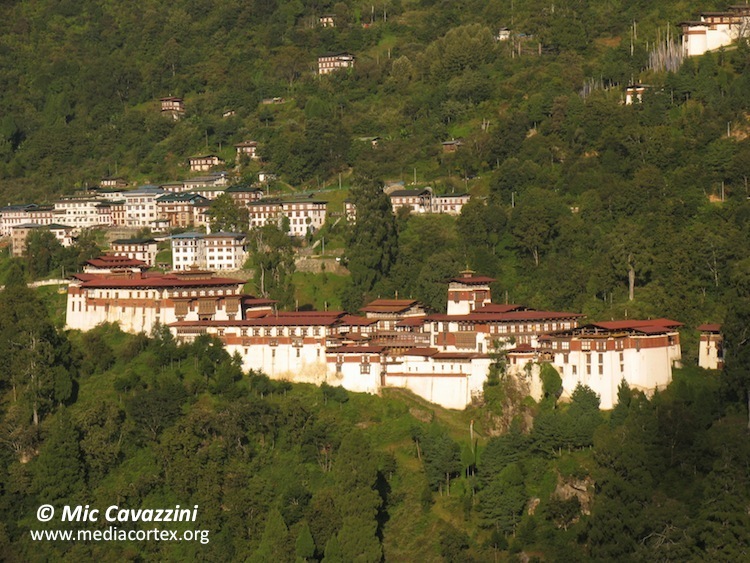 The single road connecting west to east crawls along every contour and the going is laborious even though the road is sealed. It connects the nervous centres of the kingdom, the white walled fortresses called dzhongs. These are not just military forts but also spiritual ones… even today they house both the district administration and a community of monks who share in regional powers. The grandeur and decorativeness of these citadels is spectacular, and they have been in constant use for some 600 years, given a very vibrant feel compared to the medieval castles of Europe. You can easily imagine the impression these castles would have made after traveling for days on tiny mountain trails, and there’s no doubt they did a good job controlling their territory.

The locals describe their own history in the same way that the Australian Aborigines describe the Dreaming- it is intertwined seamlessly with the mythology of the landscape events. The location of each dzhong was marked out by the flight of a bird, some ancient prophesy or the discovery of a supernatural statue. The landscape has been carved by ogres and dragons, and the sites of Guru Rinpoche’s meditations are always marked by some indentation in the rocks. My young and very modern guide describes these events without batting an eyelid. 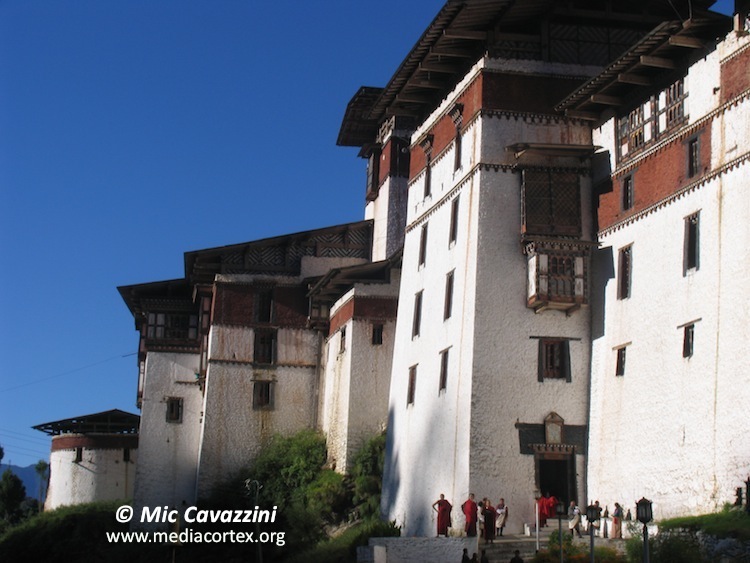 Everywhere stupas, mani walls, temples and monasteries corner hilltops or springs of special significance. Prayer flags flutter from houses and passes, and dense thickets of tall white flags mark places of remembrance for the dead. There are even stupas in the middle of the road allowing you to drive always on the left side, in the same way one is supposed to walk to the left when they’re found on mountain paths. They haven’t gone as far as drive-by prayer wheels, however.

The people are fiercely independent, and indeed their language and customs are quite distinct from the Tibetan Buddhism I’d seen in the Nepali or Indian border regions. Monks here take a high role in civic administration, and Tibet too was run essentially as a feudal system before the Chinese took over. When Western hippies tell you that “Buddhism isn’t a religion it’s a philosophy, maaan” they don’t know the half of it. 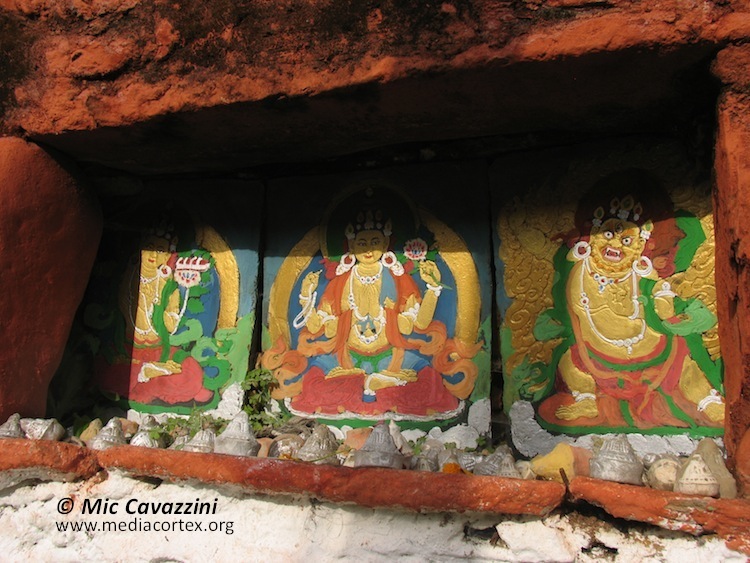 The Buddha we normally think of, Shakyamuni, was born in Nepal, became enlightened in India and from there preached to some 16 disciples or ‘arhats’. However it was in Tibet that the philosophy took hold, and developed the imagery and décor that we most often think of. But it doesn’t stop there- everyone knows the Dalai Llama, but he heads only the Keluk branch of Buddhism. In the Bhutanese branch they have their own, elected chief abbot, in the same way that orthodox Christian churches don’t follow the pope.

The faith was brought to Bhutan in the 8th century by Guru Rinpoche, who was also an enlightened one (a Buddha) and is revered in many Bhutanese temples. But there are many many other Buddhas of the present age, simply people who reached enlightenment at some point in time. The chubby laughing Buddha you see in Chinese shrines? That was some king who gave away all his riches to meditate. But in the ornamental wall paintings are also depictions of the primordial Buddha, surrounded by many godlike manifestations called Boddhisatvas- they chose to inhabit a spiritual plane where they can intervene on earth rather than go to Nirvana. 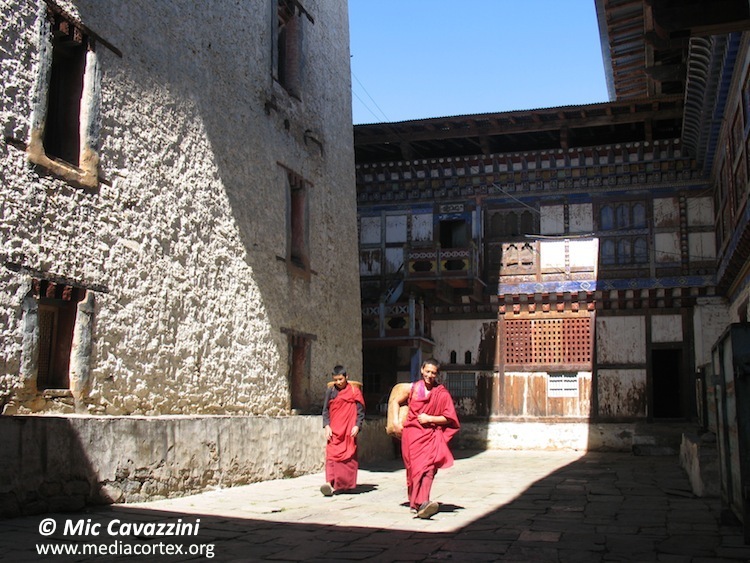 Many of these bear a sneaky resemblance to Hindu figures such as Kali and Devi and there are often chapels and mantras dedicated to individual deities. If pressed though, a Buddhist will say they are just ‘aspects’ of the Buddha, reflecting different sides of humanity. Even the historical Buddhas have various manifestations and incarnations and its all very hard to keep track of. I couldn’t figure out what the future Buddha was all about except that humans would become very small like dwarves.

Anyway, Sunday school aside, I get lucky in the very first temple I visited. By rolling dice and throwing that temple’s special number I invoke some good karma which seems to hold on several occasions in the following days- though it doesn’t extend to my camera, who’s lens mechanism has packed up. I managed to see some elaborate masked dances, monastic ceremonies, and even receive a blessing from an icon of the goddess of longevity. This is particularly memorable as hundreds and hundreds of people have come from villages far and wide for the ceremony. All in delightful costume they lined up patiently to enter the dzhong’s temple and touch the bronze statue, said to possess the power of speech.

The head monk gives me a betel-stained grin, with the drool from the corners of his mouth making him look like the Joker. He consults his astrology charts and prescribes a course of prayers for mind, for health, for luck… pulling from a basket rolls of coloured flags like a chemist grabbing reagents off the shelves. These I hang up later at a high pass we cross on the road, since it is important that the wind flutter them and invoke the mantras printed upon them. As I’m doing this, a Landcruiser pulled up and spilled out several monks in burgundy robes carrying hampers for a picnic. Before they head off, the senior of them start splashing Fanta around which from a ceremonial cup. Only once half the bottle has been spilled does he decide that the gods have had their fix and moves on to join his colleagues.

The Bhutanese also LOVE their king, who happens to be my age and to be a fellow alumnus of Magdalen College. Unfortunately this didn’t win me any special favours to enter the country without paying the daily tourist rate. His great grand father set the course for modernizing Bhutan, which until 1960 had virtually no contact with the rest of the world. All the roads and schools and hospitals have been developed since then, and they have done a remarkable job of making these adjustments while preserving their culture. Slightly clumsy but no doubt effective are the anthemic tv commercials and posters advising that “Our country is a heaven- to protect at every cost- from corruption and evil ways- The civil service should be an example to all- and operate in the strictest of respect.” I’m sure the rhyming and the metre is better in their language. 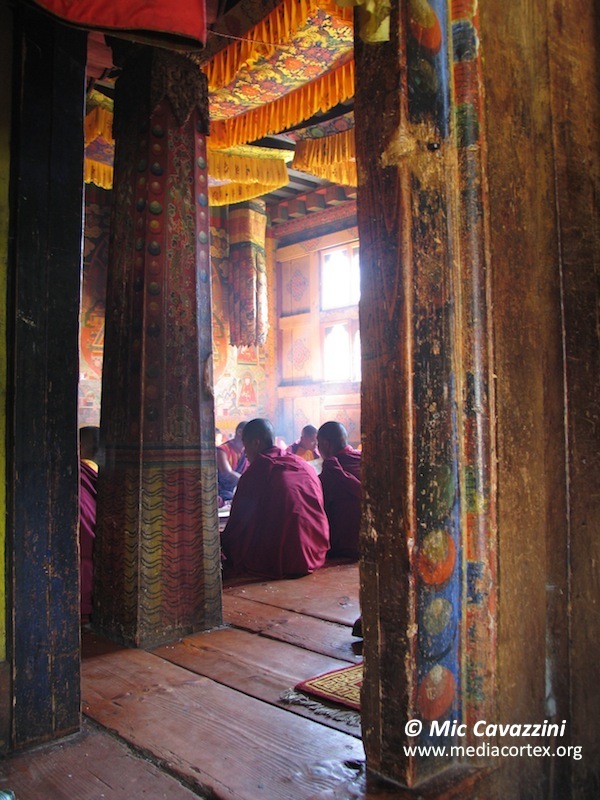 That said their karaoke clubs are not the liveliest I have seen, but my guide, Dawa, is a big fan. On stage, some made-up girls stare into the middle-distance and whine half-heartedly along to a Casio-tone soundtrack. The mostly male audience just sits and drink without much bravado, occasionally asking for a song request. There are even a few monks on a night out. This public lack of mirth may well be a cultural shyness. In Nepal I had a certain familiarity with the loud ‘Mediterranean’ style arguing, gesticulation and not to mention driving. In Bhutan the trucks actually pull aside to let the traffic through!

The Bhutanese always seem very restrained and respectful, so it’s difficult to feel immersed in the culture. And because the country is so small, all of the tourists have the same itinerary- 3 out of 4 vehicles tend to be buses full of middle-aged tour groups from the US or Europe. This Disneyland vibe detracts somewhat from the ‘land untouched by time’ expectation. There’s one night that I ask Dawa if we can stay in the village one more day, but he says we’ve got rooms booked at the next location and there are none available in the lush hotel we’re at now. I tell him I don’t mind just grabbing a room at the local inn and his eyes widen with uncertainty. “But this is not good for tourist. Very bad room and food!” He can’t understand why I would want to ‘rough it’ and actually see how Bhutanese traders travel and eat, but I finally convince him. And after a bit of insistence, he and the driver accept my invitation to dine at the same table with me. But they’re uncomfortable at my breaking down of their formal roles. 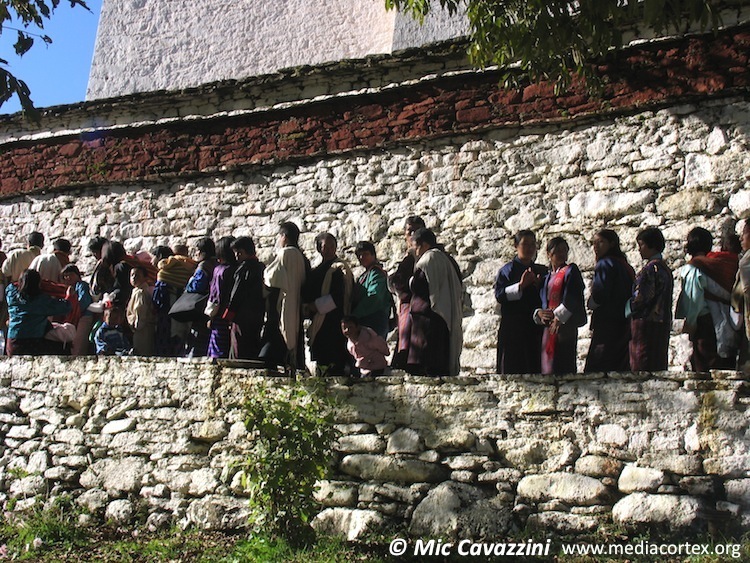 Despite the awkward social politics it’s incredible worming my way through the landscape and the history, and I have a real sense of departure as I’m driven south towards the Indian border. The rugged mountains suddenly drop away as one crosses the final 2000m pass to a sprawling plain below. The horizon is billiard-table flat and disappears to a brown smudge punctuated only by fat slow rivers snaking away to the delta and the massive Indian subcontinent. I’ve never crossed a land border like this and had such a visceral sense of transition. 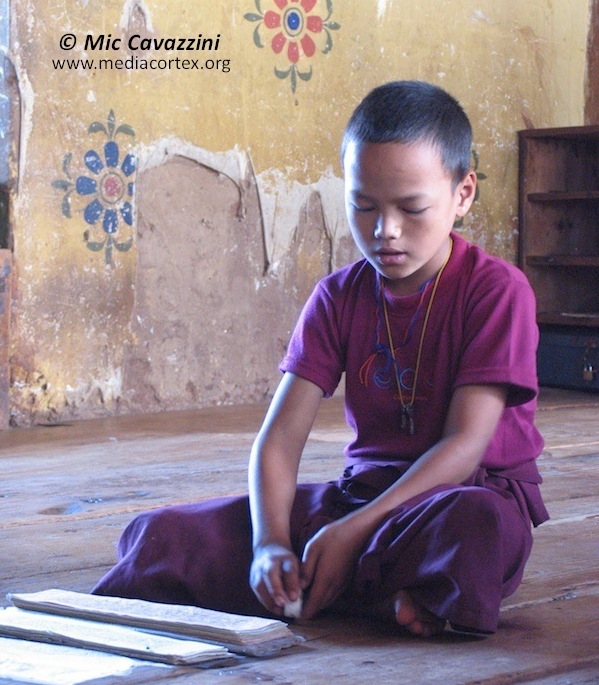